How Does the Tax Cuts & Jobs Act Affects Small Businesses? Part One: Your Income 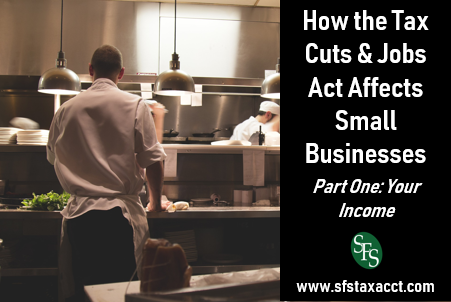 The most sweeping change to tax law in decades was ushered in late in December of 2017. The Tax Cuts & Jobs Act has many provisions that affect small businesses… and their clients.

Let’s look at your income first.

Income tax rates have been lowered for all but two income tax brackets.

The tax cuts in (most but not all) of the brackets are obvious. What’s more subtle are the effects of the shifts to the income tax brackets themselves.

Because of those shifts, some folks will fall into lower or higher tax brackets this year, with some clear winners (and losers).

One thing to note: we have a progressive system, meaning that you pay the lower tax rate on lower levels of income. Even if you’re in a higher tax bracket, you’ll pay the same rate as everyone else on the first $9,525 of your income, as well as the $9.526 to $38,700, and so on.

What your final tax bill will be depends on your personal financial situation, including the deductions you are permitted to take.

See an Enrolled Agent for an accurate estimate of what you will owe for 2018, as well as expert advice on how to lower your tax bill.

As you will see, how the Tax Cuts and Jobs Act will affect you is largely dependent on your unique situation. It’s not as cut-and-dried as an across-the-board tax cut.

In fact, due to new deduction limitations and eliminations (such as the $10,000 state and local tax deduction cap), some folks will find themselves with a larger tax bill when it’s all said and done for 2018.

In parts two and three of this series, we’ll take a closer look at the SALT deduction cap, how your other deductions may be affected, and how the new Tax Cuts & Jobs Act bill may affect the your tax bill and your client’s wallets.