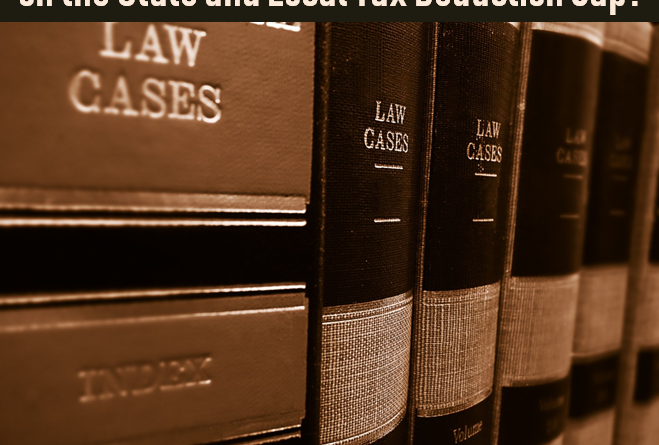 Could We See a Reversal of the SALT Deduction Cap?On July 17, four states filed suit against the federal government over the Tax Cuts & Jobs Act (TCJA) reduction of the state and local tax deduction. The TCJA limited the deduction to $10,000 per year for all state and local property, income, or sales tax.

This new cap is going to hit certain states harder than others.

While New York, New Jersey, Connecticut, and Maryland brought the suit, residents of other high-tax states will also feel the pain.

The states are calling the SALT cap an “unconstitutional assault” on their sovereignty.

According to the complaint:

By not allowing the full deduction, the states’ economies and their ability to run their governments could suffer.

How Bad Could it Get?

If state Governor Andrew Cuomo is correct, it would definitely strap their citizens… to the tune of $14.3 billion in increased federal taxes – just for this year.

That’s a tough pill to swallow.

If folks are going to get hit with a larger federal tax bill, states would likely be under pressure to lower taxes. It could also put downward pressure on home prices as buyers consider their potential tax bill. As well, residents may decide to switch to a property with a lower price tag or move to another state altogether.

Whether states lower taxes, home prices fall, or citizens take evasive measures to pay less tax, the effect is the same. States will have less revenue to run their governments, maintain infrastructure, and fund schools and public programs.

If this happens, it affects everyone… not just those benefiting from the SALT deduction.

Who is Taking the Hit?

Overall, 30% of households itemize their deductions in any given year. Of those, 95% take the SALT deduction.

Filers with incomes over $100,000 benefit from over 88% of SALT deductions, according to the Tax Foundation.

As we all know, there are multiple ways to file a tax return.

The term “filers” can include a single head of household, those married filing jointly as well as those filing single.

Therefore, two people making $50,000 each, and possibly supporting a family, are hit just as hard as individuals making $100,000 with no other mouths to feed.

Some of these “high-income” filers are also subject to the Alternative Minimum Tax (AMT). With the AMT, a separate calculation determines whether they pay more tax. In this calculation, the deduction is not allowed. In fact, taking away this deduction is the number one reason taxpayers fall victim to the AMT.

All of that aside, we have to remember that there are filers in every state who claim the deduction. Of course, those in higher-tax states are more likely to claim a deduction over the $10,000 cap.

States where the average SALT deduction is over $10,000 as of the 2014 tax year were (dollar amounts rounded):

State and local taxes have been deductible since federal income tax began in 1913.

Over the years, the deduction has been tinkered with. In 1964, limits were imposed so that only property, income, general sales and motor fuels tax could be deducted. Then, in 1978, Congress eliminated the deduction for motor fuel tax. General sales tax was stripped away in 1986.

In a reversal of the trend, Congress reinstated the sales tax deduction in 2004. This temporary measure allowed taxpayers to deduct either income or sales taxes. In 2015, this was made a permanent provision.

What Will Happen Next?

It’s too early to tell if this lawsuit will have any effect.

Currently, the Treasury Department is “reviewing” the suit.

We’ll all have to stay tuned for this one.

In the meantime, with about five months left in this tax year, it’s wise to make tax plans for the cap as it is.

Have an Enrolled Agent assess your unique situation and advise you on smart moves to lower your tax liability for the year… while you still can.