Look Out! The Taxes are Coming… 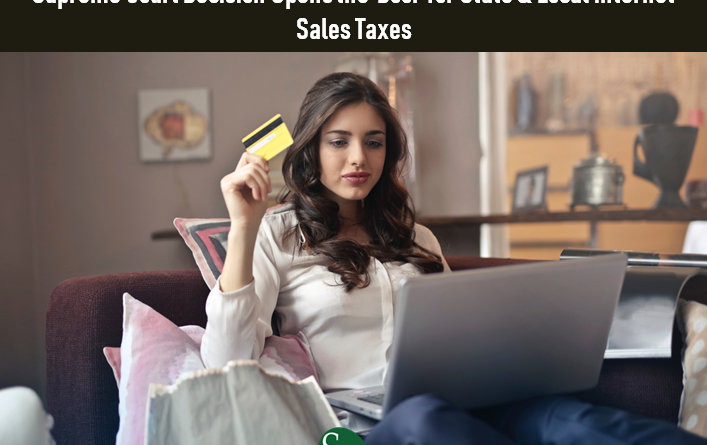 Supreme Court Decision Opens the Door for State & Local Internet Sales TaxesThings are about to change in the realm of state and local taxes and Internet purchases, thanks to the recent U.S. Supreme Court decision on South Dakota vs. Wayfair, Inc.

But First, Some Background…

In order to understand the wide-reaching impacts of this decision, you need to know a little bit about how this case came to be.

Currently, many smaller businesses generally do not charge sales tax to customers in other states, unless the business meets certain criteria. One of these being that you had to have a “nexus” in that state.

What is a Nexus?

Nexus, also known as “sufficient physical presence,” is the determining factor of whether an out-of-state business selling products is liable for collecting sales or use tax on sales in another state.

Nexus is required before a taxing jurisdiction can impose its taxes on an entity.

That is the premise of what was decided in two landmark cases commonly known as National Bellas Hess and Quill (and in a much older Complete Auto case) which defined the commerce clause.

What Does this Mean?

If you have no other connection to a state other than shipping goods to that state, you do not have to register to collect and then pay sales tax to that state.

Instead, you collect and pay sales tax on sales made and delivered in the state where you are domiciled or are physically located.

When you ship goods out of your domiciled state, you do not have to collect or pay sales or income tax to that other state.

Though the recently decided Supreme Court case centers around these technical issues (nexus and the commerce clause), it has much to do with Internet sales as it pertains to the small business person.

Most big internet companies (E-bay, Amazon, Etsy, etc.) already have a physical presence in many states, as they keep warehouses of merchandise around the country. (That qualifies as “nexus” as it does not always mean people).

The issue is for small business – those that sell via the Internet, are located in just one state, and ship their wares to customers across the nation (versus their own delivery). Now, this Internet seller does not charge sales tax on those out-of-state sales. Similarly, when those small businesses (sometimes one-man operations) sell an item on eBay, Amazon, or another big online retailer, they are not collecting sales tax, either.

The decision in this case, though, opens the door to states and local municipalities requiring sales tax be collected and paid on Internet purchases within their state – whether or not the seller has a local nexus.

The states, as well as the brick and mortar stores, claim that Internet sellers have had an unfair advantage.

Would you want to pay an extra three to eight percent to a store or buy it via the Internet?  In addition, with many not charging for delivery (i.e., Amazon Prime, Office Depot, Staples, etc.), why would you purchase anything any other way?

At the same time, states are eyeing billions of lost sales tax dollars ($8 to $33 billion by some estimates).

This is what led South Dakota to take Wayfair all the way to the Supreme Court… they wanted to get their fair share.

A much-divided court ruled that the commerce clause, as ruled upon by the USSCT in the National Bellas Hess and Quill cases, was incorrect as it does not apply to today’s selling/buying environment.

To quote Justice Kennedy, who wrote the Court’s opinion: “Because the physical presence rule as defined by Quill is no longer a clear or easily applicable standard, arguments for reliance based on its clarity are misplaced.”

In simple terms, this means that physical presence should not be the standard.

Once Again, the Small Guy (and Gal) takes the hit

Based on this decision, South Dakota can now require online and out-of-state retailers to register with South Dakota to collect sales tax on sales delivered into their state and remit that money to them.

How this will happen is anyone’s guess.

In fact, Wayfair, with Overstock.com and Newegg, in addition to 23 others filing briefs in support of Wayfair, stated in the petitions that there are 45 states, plus the District of Columbia, that have a sales tax, and thousands of local taxing jurisdictions.

This dizzying array of jurisdictions results in thousands of different tax rates, taxable and exempt products and services, exempt purchasers, shipping tax treatment, specialized tax rules (such as sales tax “holidays” and “thresholds” for different products), statutory definitions, registration and reporting regimes, record keeping requirements, and filing systems. In addition to compliance burdens, companies are exposed to a potential audit by every state and locality with some self-administered sales or use tax.

However, this fell on deaf ears and the state won.

Is A Small Business Exemption the Answer?

Although this could be bad enough for the small retailer, no one mentioned the income tax effect. If the states are claiming nexus for sales tax, they also could be claiming the need to pay income tax based on those sales.

Large retailers Etsy, eBay and Overstock have called on Congress to intervene. eBay went as far as calling for a small business exemption.

Indeed, it will be interesting to see how the states will require reporting and paying. Some say it could be done the same way as in-state sales tax is charged (on the individual state’s returns). Or, the retailer’s state could create a section on their return to remit the tax and that state to remit it to the other. Where will the burdens fall?

Needless to say, it will be quite interesting, to say the least.