What Did the Tax Cuts & Jobs Act do to My Income Tax? 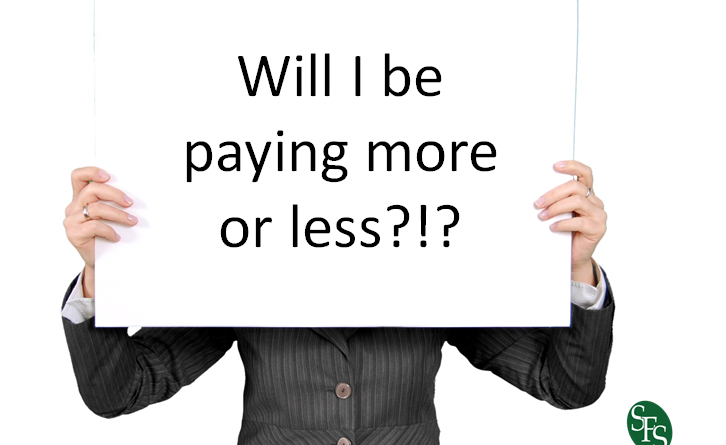 Many changes were ushered in by the Tax Cuts & Jobs Act which passed in December 2017. Depending on your tax situation, the most impactful changes for individuals were to:

For those with children, the doubling of the child tax credit can also make a difference.

In the first of this two-part series, we’ll look at the changes to the ordinary income tax rates.

Income Tax Changes: Most Will Pay Less, Some will Pay More (and Some will Stay the Same)

A closer look reveals that, while some — not all – tax rates are going down, the income brackets have also shifted. Those tax rate decreases are not the same across the board, either. This leads to varying effects on different levels of income.

What does this mean?

This is in line with the Tax Policy Center’s finding that around 80% of Americans would receive (some degree of a) tax cut under the new law.

How will the Average American Do?

If you haven’t noticed your tax cut in your paycheck, most likely it’s because those decreases are divided out between 26 paychecks (or 24 in some cases).

This would be the reason you haven’t seen too many average Americans dancing in the streets over tax rate cuts.

How does income tax work anyway?

But it’s not quite that simple.

All taxpayers pay lower rates on the lower levels of their income, so even those in the highest brackets will benefit from a decrease to the lower rates.

For example, single taxpayers in 2018 will pay:

Although she falls into the 37% tax bracket, her effective income tax rate (what she actually will pay) is 36%.

Why? Because the lower levels of her income are taxed at lower rates.

Let’s use one more example of a single male taxpayer making a more taxable income of $50,000.

This taxpayer is benefiting much more from the lower tax rates of the first two income tax brackets.

Why? Because the majority of his taxable income falls into a lower tax rate bracket.

He is paying an effective tax rate of 14% even though he is in the 22% tax bracket.

To illustrate how the tax cuts play out in 2018 versus 2017, see infographic below. For the sake of brevity, we are only looking at the effects to the single taxpayer.

There weren’t just changes to the tax rates (in some cases).

There were also changes to the income ranges in each tax bracket.

Overall, there are decreases in the rates for everyone who files single status of over $9,325 income.

There’s a slight increase in taxes for single folks making between $390,000 and $450,000 (which would most likely be barely noticeable at that level of income).

Oddly, those making over $500,000, however, will see decreases in their tax rate. These decreases get higher as their income rises.

Get the Whole Story

Of course, how many of us just pay the tax rate on the tax table?

The answer is that none of us do.

All of us either take standard deductions or itemize to lower our taxable income. Up until now, we could also take personal exemptions. However, that has been eliminated in the new tax code.

We’ll take a more complete look at how the Tax Cuts and Jobs Act will affect you in part two, where we will analyze the changes to the standard deductions, personal exemptions, and the child tax credit.

In the meantime, know that there are ways to reduce the taxes you pay – no matter where you fall on the income scale.

See your tax professional to find out how to take action now for a lower tax bill come April 2019.