Beware the Ides of March! The First Tax Return Deadline is Today 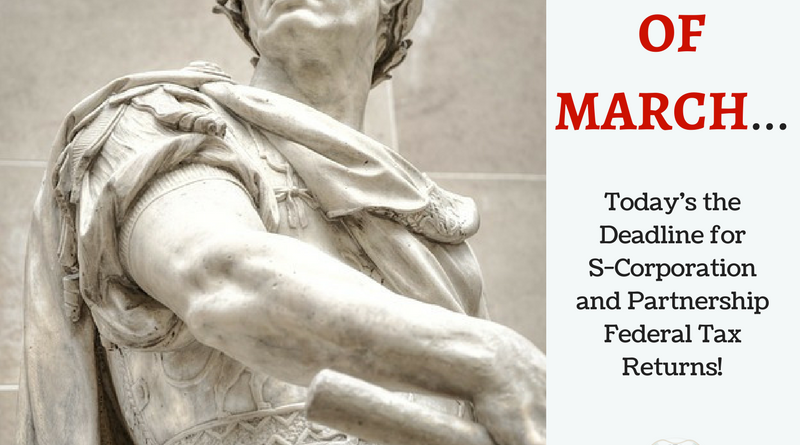 If only William Shakespeare could have traveled back in time to early 44 B.C.
He would have been able to warn Julius Caesar about his impending assassination on March 15 by Marcus Brutus.

It may not have done any good.

Caesar had warnings, according to Shakespeare’s study of the Roman dictator.

Yet he ignored the prophecies of his impending doom, and he paid the ultimate price on that fateful ides of March.

Would the appearance of a 16th-century playwright/time traveler have changed things? Maybe it would have jolted Caesar out of a sense of complacency that led to his downfall… but then again, maybe not.

If Caesar had been an Enrolled Agent, he would have known to heed the ides of March!

March 15 may not pose a danger dying at the hands of jealous employees, but tax day can sneak up on you much the same way.

The ides of March has deep roots as a day to beware of.

Not only is it the anniversary of Caesar’s murder, but from 1918 to 1954, it was Tax Day. That changed in 1954 when the IRS moved it to April 15 in order to “spread out the peak workload.” (Now, if April 15 falls on a Saturday or Sunday, the tax deadline moves to the following Monday. This year, Monday is Emancipation Day in Washington DC, which moves Tax Day to Tuesday, April 17).

With all of the focus on April 17, the ides of March may escape your notice.

Here’s what you need to know:

Don’t let the March 15 deadline catch you by surprise like Brutus’ nefarious plans for Caesar.