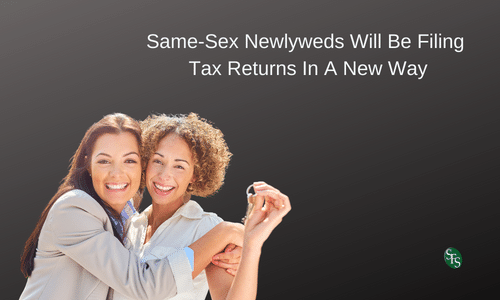 Washington, DC, (February 17, 2015) Despite Alabama Chief Justice Roy Moore’s 11th hour attempt to block same-sex marriages in his state, Alabama has become the 37th state in which gays can legally wed. Like all marriages, same-sex spouses have to follow federal and state tax laws – which can be confusing. For example, what if you’re a same-sex couple from Arkansas, where same-sex marriage is not recognized, but got married in Maine, which legalized it in 2012? Can you file a joint federal return? Should you file jointly in your state of domicile?

For federal tax purposes, IRS recognizes a marriage of same-sex individuals in a state that has legalized same-sex marriage, even if the couple resides in a state that considers it unlawful. For tax year 2013 and going forward, same-sex spouses generally must file using a married filing separately or jointly filing status. Like opposite-sex couples, same-sex spouses may not be claimed as dependents. Filing jointly provides two personal exemptions for the husband and wife, plus one personal exemption for each dependent.

Married filing separately (MFS) is usually considered the less desirable filing status because married filing jointly (MFJ) offers wider income brackets, allowing more income to be taxed at lower rates. Joint filers are also eligible for a wider range of tax deductions and credits. However, newlyweds must consider that filing jointly means they are equally responsible for what is on the return, so if there is any reason to suspect a spouse may not be totally honest on the tax return you both will sign, opt to file separately.

Of course, gay married couples in states that have recognized same-sex marriage can file both federal and state returns jointly. But while most people first complete the federal return and allow that to serve as a basis for the state return, couples in states where same-sex marriage is not legal, such as Ohio and Virginia, must file their state returns separately. The Supreme Court will decide in June whether all states must allow gay and lesbian couples to marry, but there is one option that could allow same-sex couples to avoid the extra work on their returns: file extensions. An extension provides six additional months to file returns, by which point the Court should have made it clear whether same-sex couples will be allowed to file jointly in all 50 states.  However, anyone filing an extension must keep in mind that the extension is an extension on the time to file and not an extension on the time to pay. Taxpayers are required to estimate the amount of tax that may be due with the tax return and remit payment with the extension to avoid Failure to Pay penalties and interest.

Filing tax returns can be complicated regardless of your marital status. To make sure you take advantage of every credit and deduction you are entitled to, consult a licensed tax professional. Enrolled agents (“EAs”) are licensed by the U.S. Department of Treasury and overseen by the IRS. EAs provide tax preparation, tax advice, and tax planning services in addition to helping taxpayers resolve problems with the IRS. Contact local Enrolled Agent, Jeffrey Schneider, EA, NTPI Fellow of SFS Tax & Accounting Services, with offices in St Lucie and Palm Beach County.