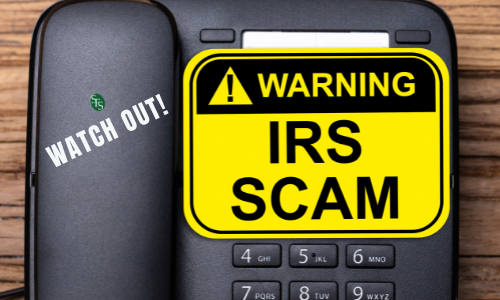 The Treasury Inspector General for Tax Administration, J. Russell George, warned taxpayers to beware of phone calls from individuals who claim to represent the Internal Revenue Service. Fraudsters are trying to defraud them in the largest ever scam it has seen to date.

“The increasing number of people receiving these unsolicited calls from individuals who fraudulently claim to represent the IRS is alarming,” said George. “At all times, and particularly during the tax filing season, we want to make sure that innocent taxpayers are alert to this scam so they are not harmed by these criminals. Do not become a victim.”

George urged taxpayers to heed warnings about the sophisticated phone scam targeting taxpayers, noting that the scam has hit taxpayers in nearly every state in the country. Callers claiming to be from the IRS tell intended victims they owe taxes and must pay using a pre-paid debit card or wire transfer. The scammers threaten those who refuse to pay with arrest, deportation or loss of a business or driver’s license.

The truth, TIGTA pointed out, is the IRS usually first contacts people by mail—not by phone—about unpaid taxes. The IRS also won’t ask for payment using a pre-paid debit card or wire transfer, and the agency won’t ask for a credit card number over the phone.

“If someone unexpectedly calls claiming to be from the IRS and uses threatening language if you don’t pay immediately, that is a sign that it really isn’t the IRS calling,” said George.

The callers who commit this fraud typically use common names and fake IRS badge numbers, TIGTA noted. The scammers also frequently know the last four digits of the victim’s Social Security Number make the caller ID information appear as if the IRS is calling, making the scam even more convincing. In addition, they tend to send bogus IRS e-mails to support their scam, and call a second time claiming to be the policy or department of motor vehicles, and the caller ID again supports their claim.

TIGTA said that if you receive a call from someone claiming to be with the IRS asking for a payment, here’s what to do. If you owe federal taxes, or think you may owe taxes, hang up and call the IRS at 800-829-1040. IRS workers can help you with your payment questions. If you don’t owe taxes, call and report the incident to TIGTA at 800-366-4484. You can also file a complaint with the Federal Trade Commission at www.FTC.gov. Add “IRS Telephone Scam” to the comments in your complaint.

TIGTA and the IRS are encouraging taxpayers to be alert for phone and e-mail scams that use the IRS name. The IRS said it will never request personal or financial information by email, texting or any social media. Taxpayers who received scam e-mails should forward them to phishing@irs.gov, but they should not open any attachments or click on any links in those emails.

Taxpayers also should be aware that there are other unrelated scams (such as a lottery sweepstakes winner) and solicitations (such as debt relief) that fraudulently claim to be from the IRS.